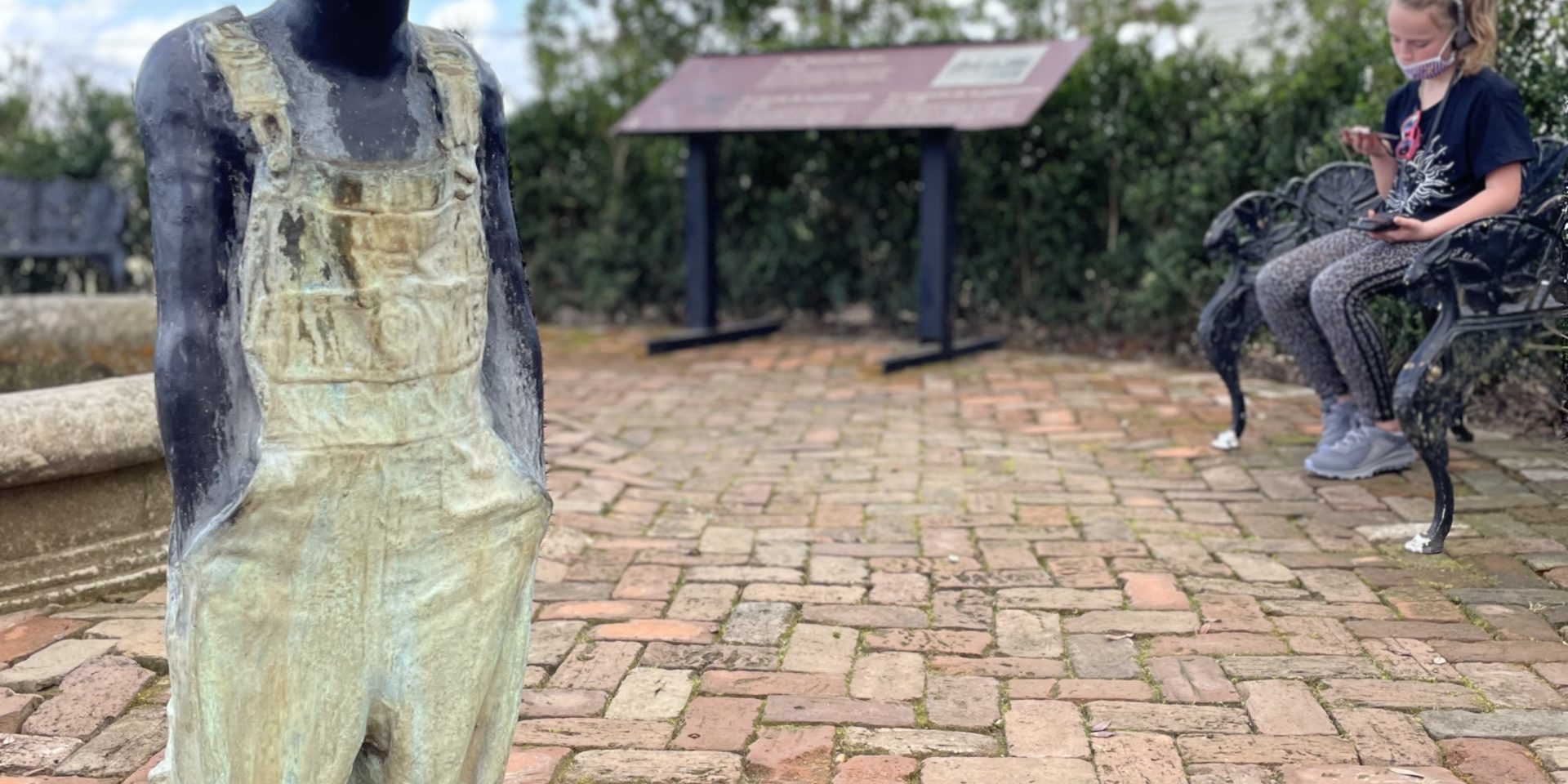 Vanlife is supposed to be all about experiences.  Adventure.  The sights.  A quick google search will overload you with pictures of oceans, beaches, National Parks, and the wonders of the world around us.  And make no mistake – that’s one of the reasons we embarked on this journey.  Particularly, we wanted to show the world to our kids before “life” gets in the way and makes it harder to do.

But the other thing we vowed to do was teach our kids about the places we visited.  The culture.  The food.  The history.  We don’t expect 8-year-olds to remember every step along the way, but surely some of it will stick with them, right? 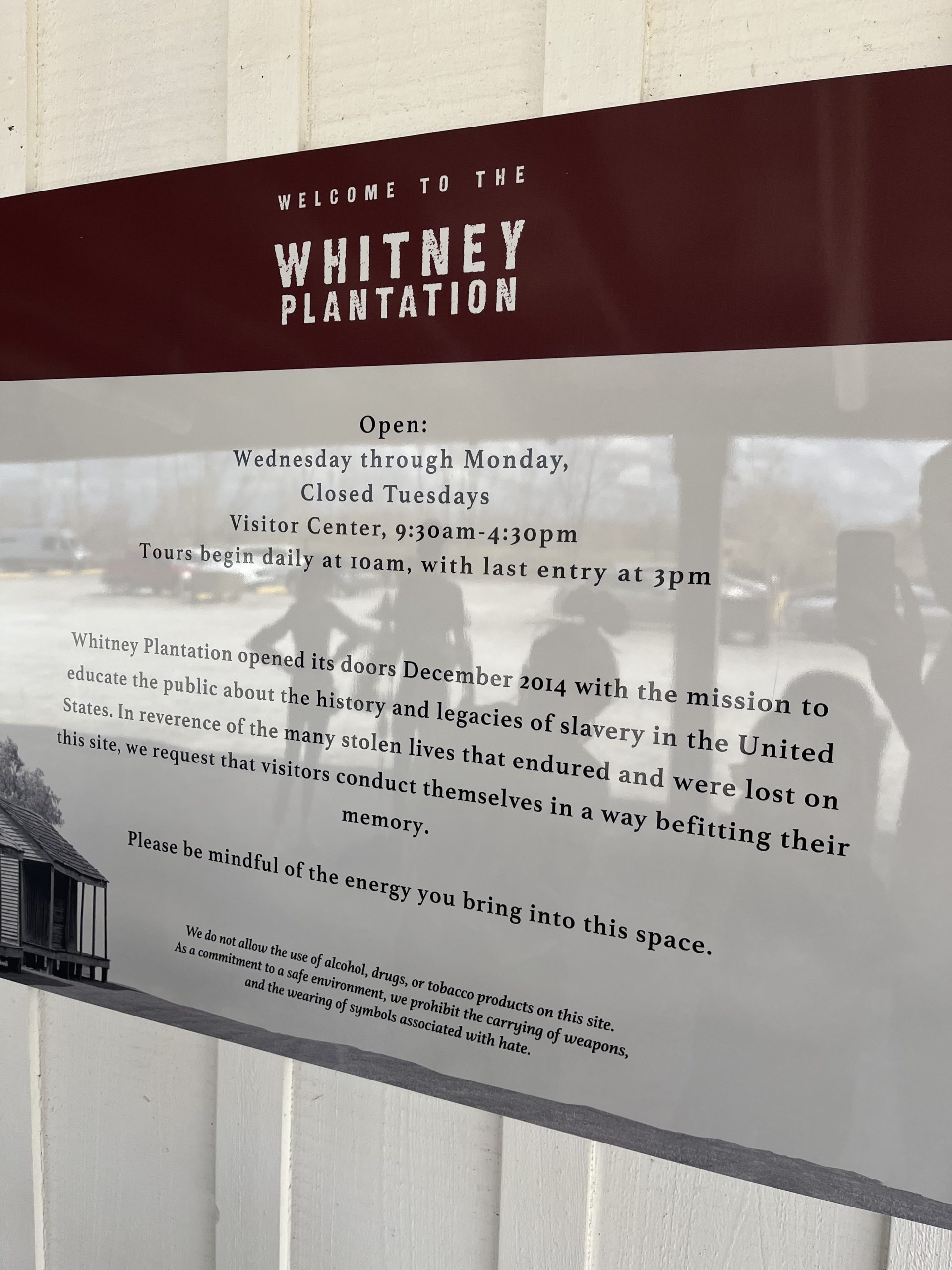 Which brings us to a few weeks ago.  Our family toured the Whitney Plantation in Wallace, LA.  It’s billed as the only museum in Louisiana with an exclusive focus on the lives of enslaved people, sitting on the original grounds of a full-functioning sugar plantation about 30 minutes west of New Orleans.  While the museum and exhibits are free of charge and provide great insight into the Transatlantic Slave trade and the history of slavery in Louisiana (and the United States for that matter), the audio tour of the grounds is an absolute must.  That is, if you’re up for a truly life-changing experience.

Before we get into the details – and since this article will live on the internet for anyone to see, including those who don’t know us personally – it feels necessary to call out some of the obvious.

Given all that, we knew it was important to show our children the history of slavery.  We can’t shy away from it.  But admittedly, we didn’t expect to feel it.  The Whitney Plantation audio tour will take you through the full picture of slavery at the plantation in a way which no book or story can do justice.  Years of learning about slavery or talking about racism with friends who experienced it can’t hold a candle to walking the grounds.

So, what did we learn?  Or what could you expect if you take the opportunity to visit the Whitney Plantation yourself?

We weren’t sure what to expect prior to arriving, but given the nature of the subject, we were curious if it would be too graphic for our 8-year-olds to handle (we were picturing “Django Unchained” or “12 Years a Slave” type graphic).  While there’s parts which some might deem graphic (more to come on that later), it really finds subtle ways to make a lasting impact and incite emotion. 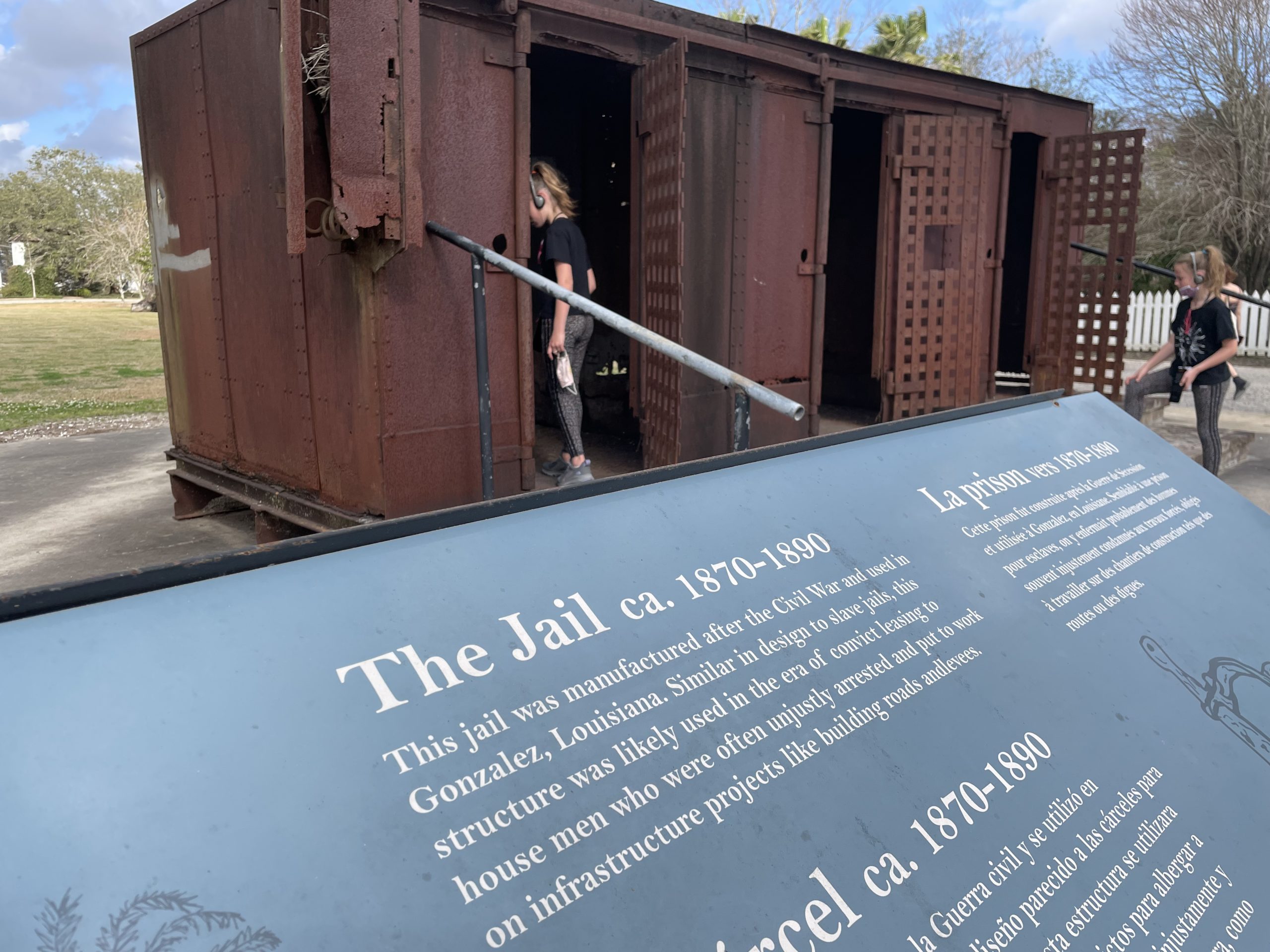 For example, one of the exhibits showcases the jail likely used to transport slaves and/or unjustly convicted men of color to the plantation.  Any jail cell would be eerie on its own, but it’s the subtle experience of standing in the cramped space where you can see/touch the iron used to secure the shackles to the jail cell wall.  You see, it wasn’t enough to put them in a jail cell.  They had to go the extra step to shackle them to the wall, too. 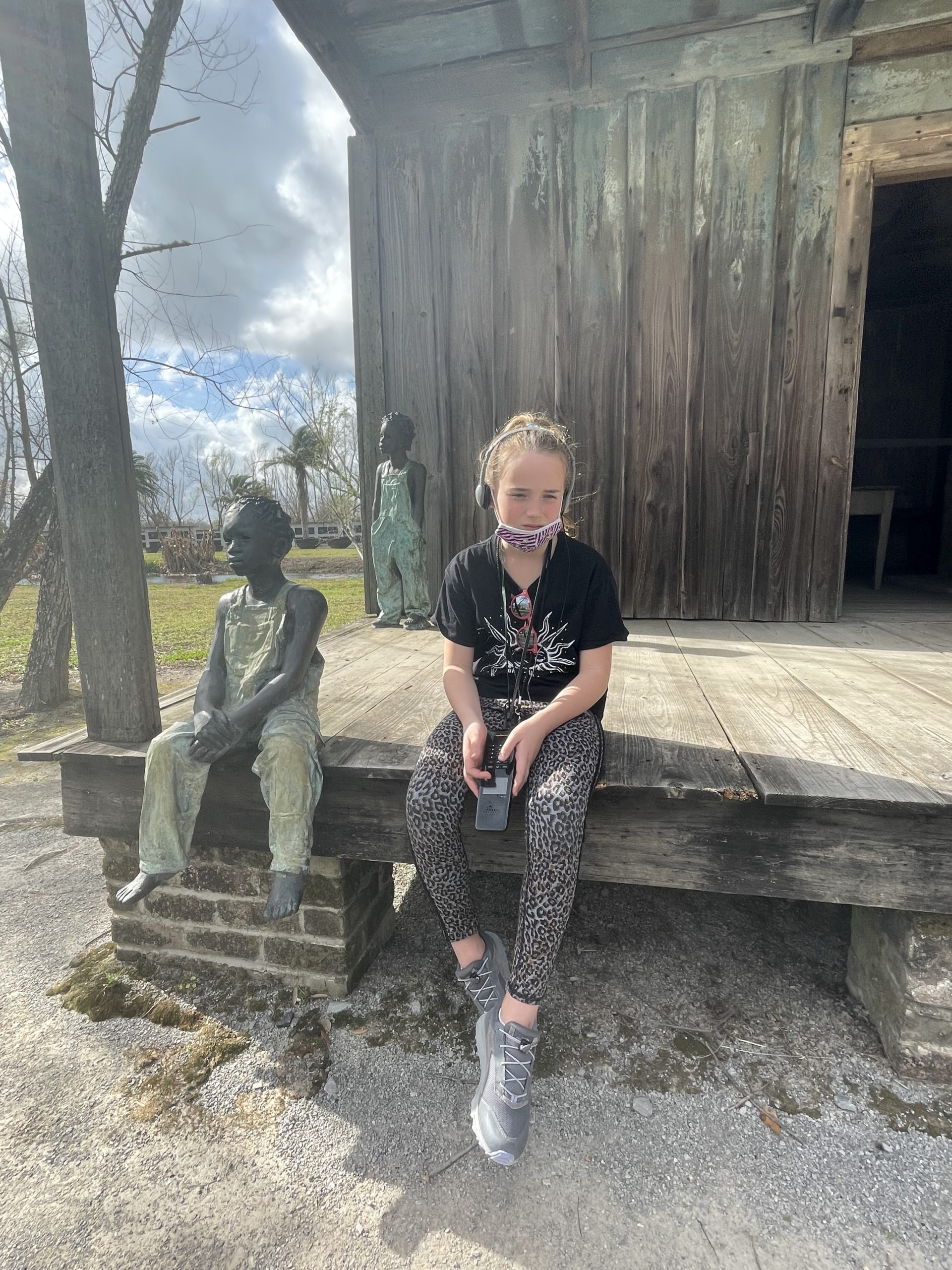 Other examples are the statues located throughout the property.  The work of Ohio-based artist Woodrow Nash, most of the statues depict slave children, in part to remind us how many children were a part of slavery in the South.  But additionally, despite looking extremely life-like and realistic, the eyes on all the statues were removed.  Is that purely for artistic purposes?  To signal oppression?  We’re not sure the exact reasoning, but there’s a part which feels like it’s intentional to signify the years and decades society turned a blind eye to the injustices of these people.  After all, many plantation tours simply celebrate the wealth, opulence and “antebellum” lifestyle of the South.  The Whitney Plantation seeks to tell the truth and real story behind plantation life in the 1800s and 1900s. 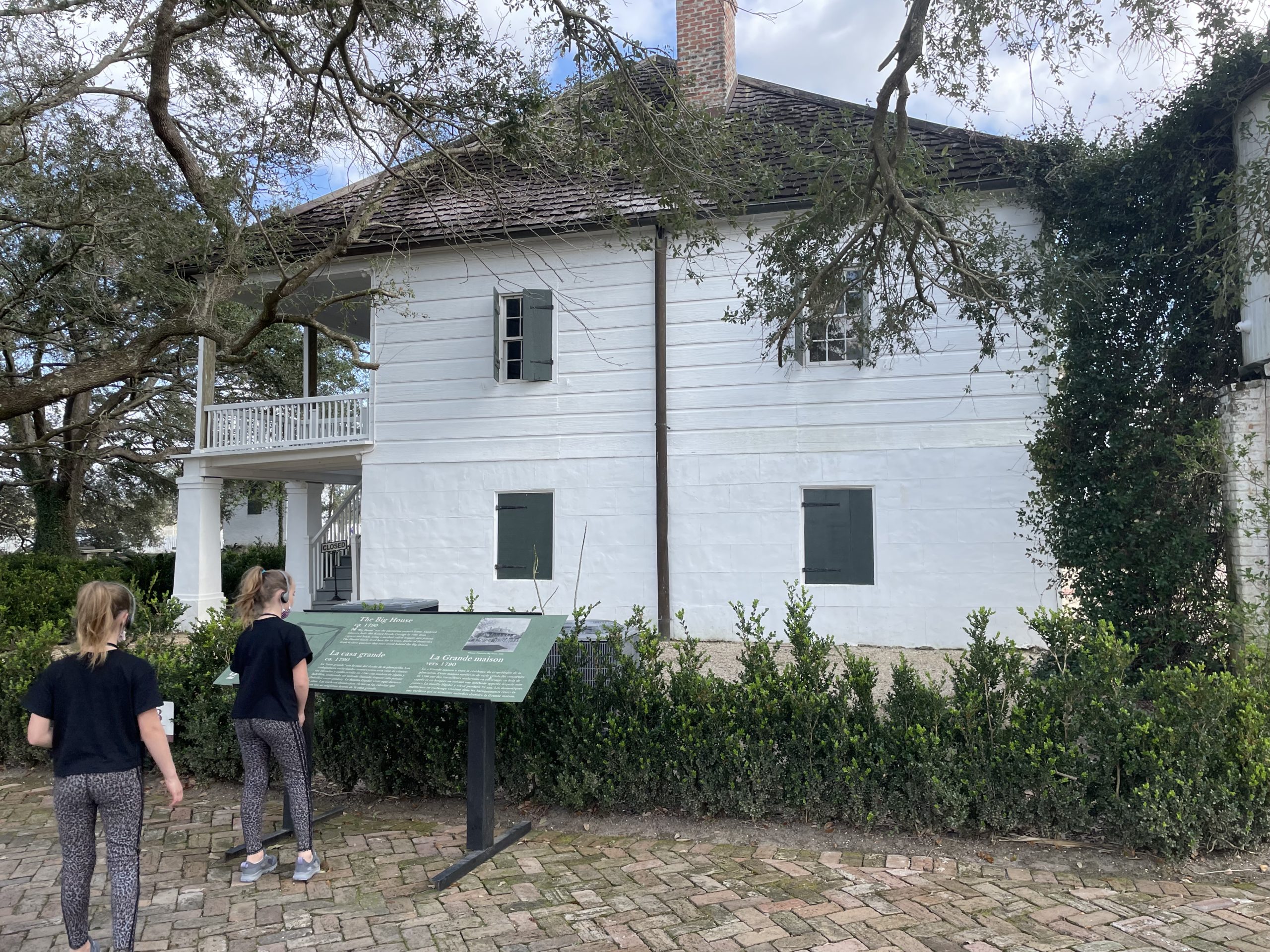 It’s one thing to hear about how former slaves, newly emancipated after the Civil War, would return to the very plantations they once served to “work” the land for a wage.  It’s another thing to physically see how the cycle of oppression held a grip on thousands of people decades and centuries later.

After touring the plantation home, which was built by the slave themselves, you walk to visit the store.  The store is where the people who worked there could buy food or personal items, sold to them by the plantation owner themselves.  The “wages” they received – sometimes as little as $1 a day – couldn’t even cover the $1.50 or more it cost from the store.

That is how the plantation owners got around the new laws enacted around slavery.  After all, it wasn’t slavery if they were paid a wage………….

THE WHITNEY PLANTATION SAVES THE BEST (OR WORST) FOR LAST

After seeing the plantation owner’s home, the store, the kitchen, jail, and slave quarters, you’ll walk about a quarter mile to the opposite end of the grounds, winding through trees on a trail which leads to two of the more impactful exhibits on the whole property. 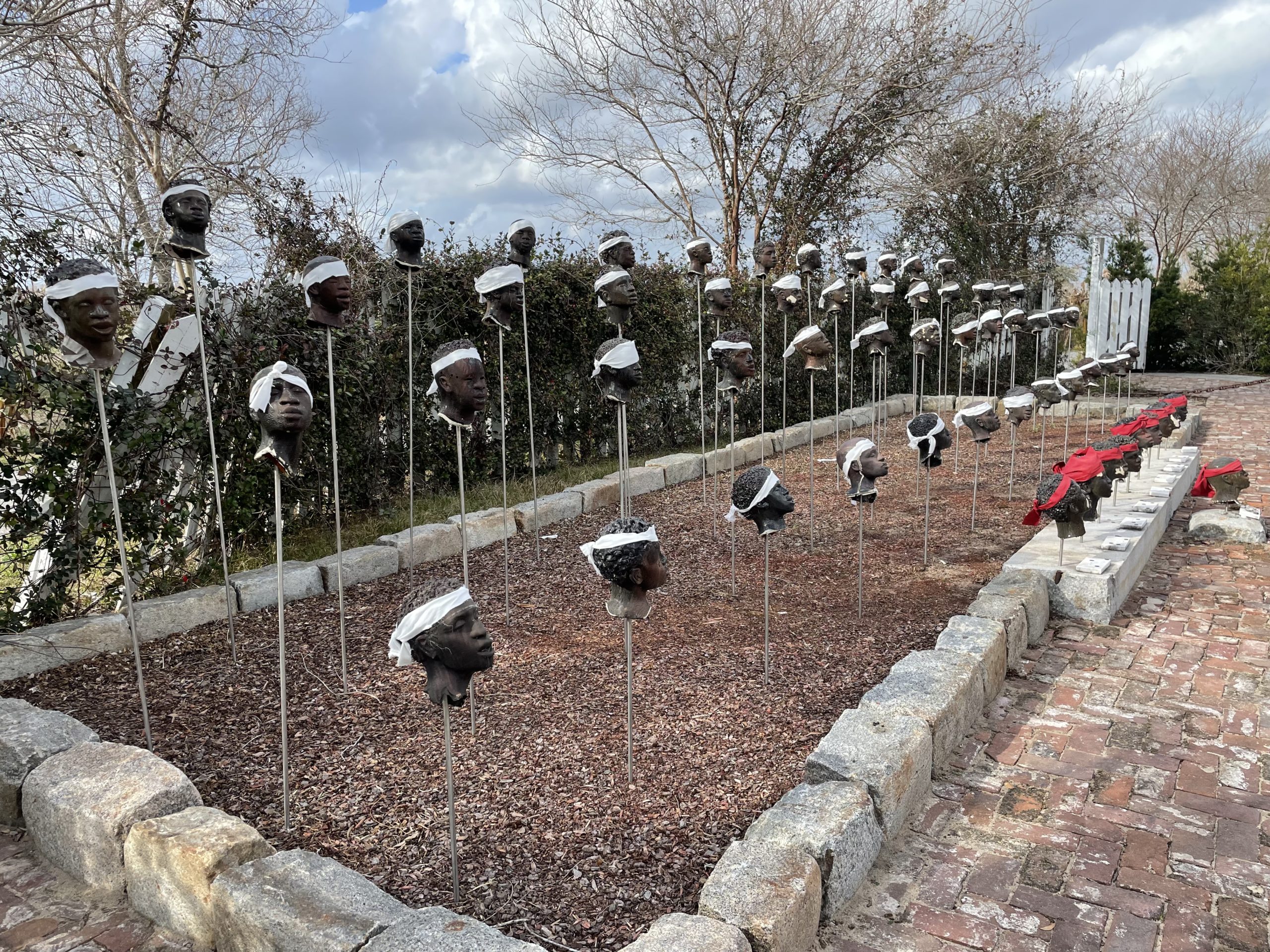 The first is a memorial of the 1811 Slave Revolt where anywhere from 50-90 slaves participated in a two-day insurrection near St. John parish.  Armed only their tools used in the fields, these men stormed plantations, killing at least two plantation owners and causing massive damage to the properties in their path.  It didn’t take long for the local militia – backed by Federal troops – to overwhelm the insurgents, killing more than 30 in the battle before the remaining surrendered.  Trials were held within the week without appeal, where more than 40 people were ordered to be shot on the property where they belonged.  Additionally, it was ordered their heads would be cut off and planted on poles in plain sight as a way to discourage anyone else from getting any ideas about running off.

I’ll be honest – I don’t even like writing those words.  It’s emotional just to think about it.  But even more emotional is the sight on property.  The memorial is what appears to be a never-ending sea of heads on stakes – each with those same eyes removed – so you’re forced to almost look the insurgents in the face to understand what they must have been going through.  The insurgents knew there was no way out of this except for death.  From the Whitney Plantation website:

“This was the fate of those enslaved people whose only fault was their quest for freedom. Their goal was to capture New Orleans and free all the slaves. They knew they could not win and only death would be at the end of the journey. Although they did enjoy nothing but few precious hour of freedom, their action is comparable in its principle to that of the founding fathers who signed the Declaration of Independence knowing that they would be hanged if they lost the War of Independence.” 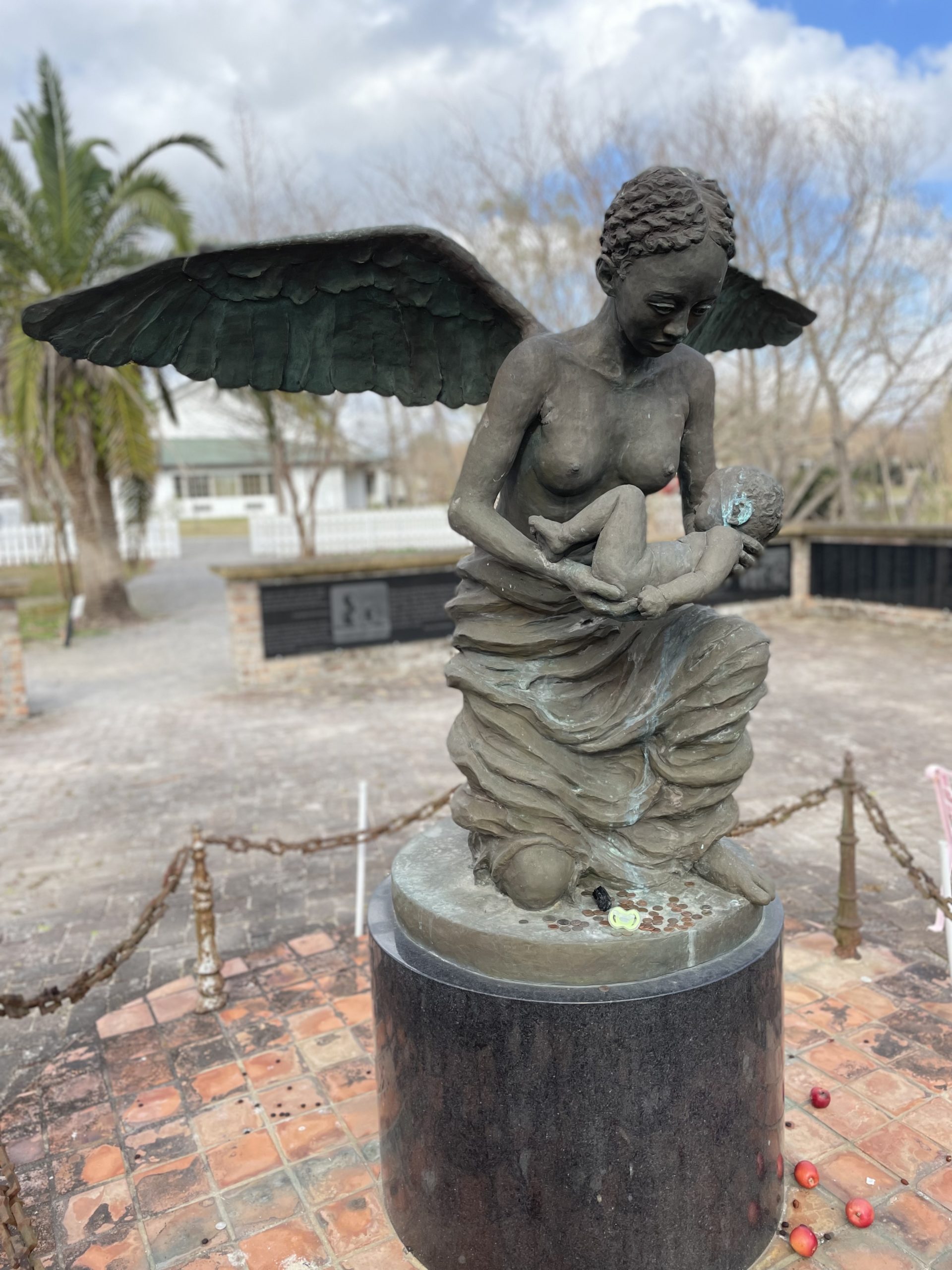 While the names engraved on the plaques with chilling quotes from those times sprinkled throughout are enough on their own, the bronze statue of a black angel carrying a baby to heaven reverberates hard.  As a parent, the words simply don’t do justice.  There’s an overwhelming sense of pain imagining the lives of these women and children and the artist’s work capturing the emotion of it all is truly breathtaking. 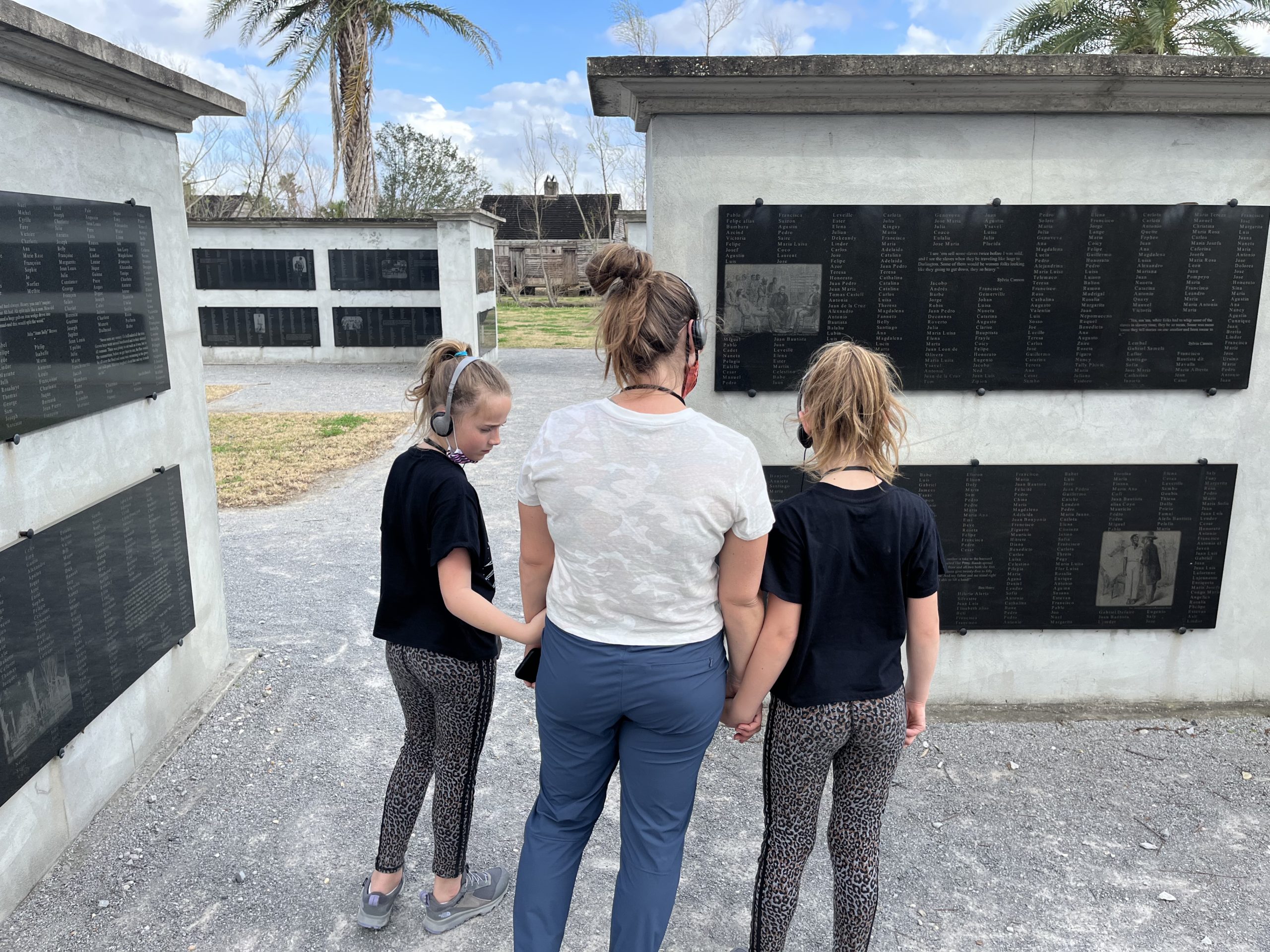 I realize we aren’t painting a rosy picture of our experience at the Whitney Plantation.  But you know what?  Slavery wasn’t rosy.  Racism was – and continues to be to this day – one of the ugliest stains in our history.

But if you’re willing to learn and want to experience something you won’t learn in the classroom or by reading a book, then the Whitney Plantation should absolutely be a stop on your journey the next time you’re in or near New Orleans. 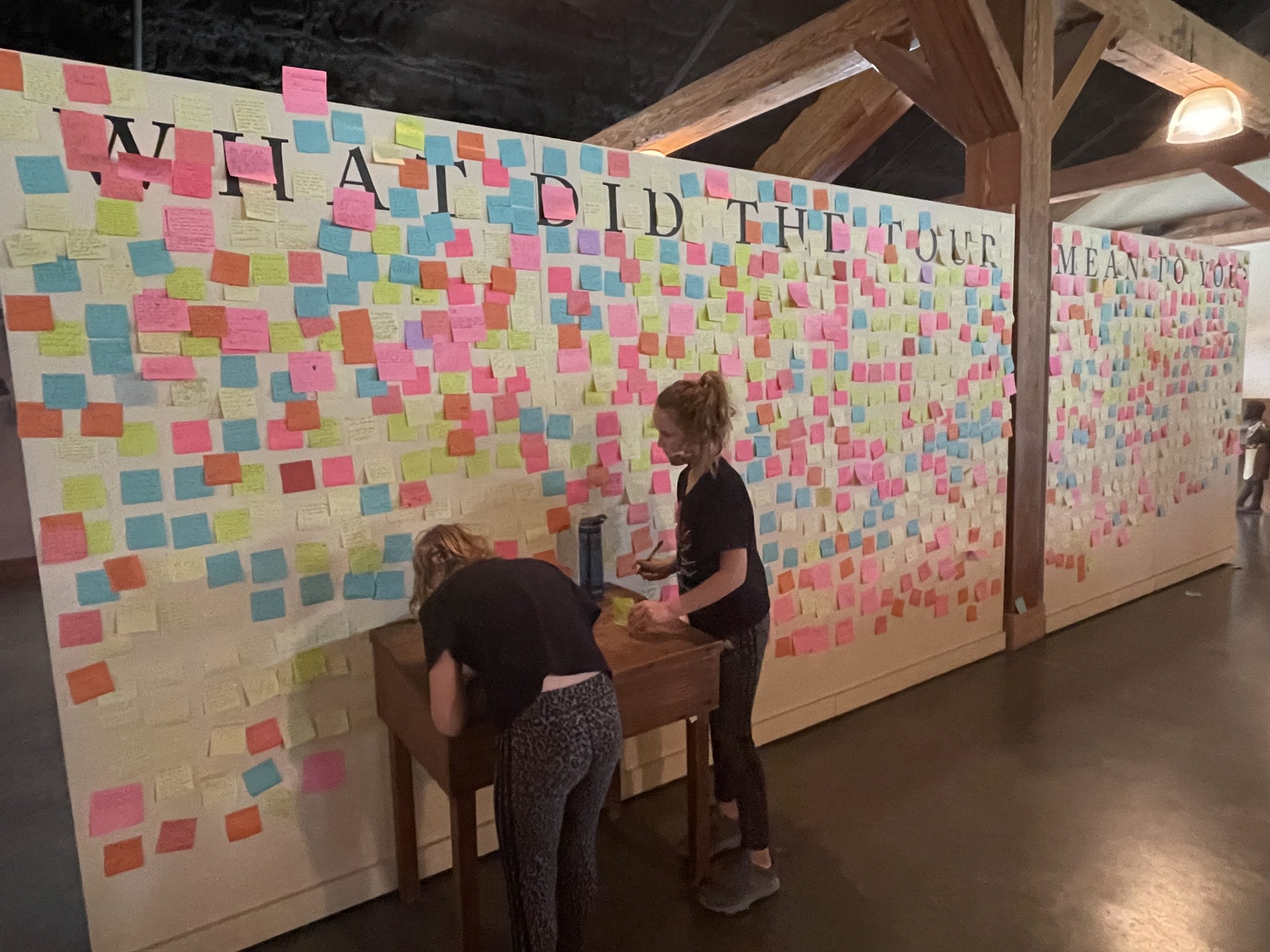 FYI – the audio tour is self-guided, so you’re going at your own pace, but a comfortable walking pace is probably going to take 60-90 minutes.